You are here: Home / Self Defense / Reality Martial Arts: Immobilizing and Lethal Strikes of Special Forces 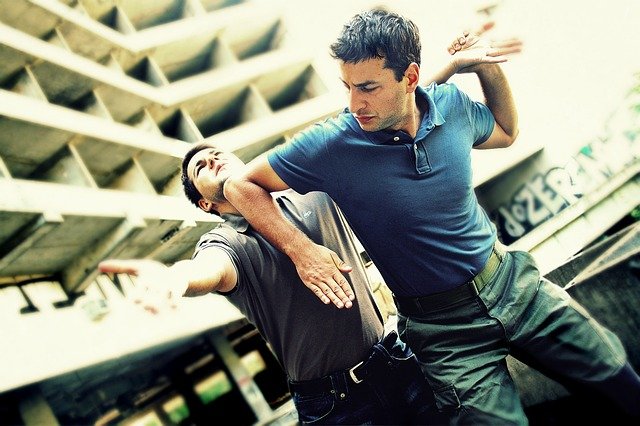 How would you like to end a fight before it even starts? What does it mean to have a tactical response? What parts of the body offer fast ways to immobilize an attacker?
(Continued from Part 1 – Hand to Hand Combat of Military Special Forces)

1) Kick him in the groin so hard that he feels his testicles in his throat.

2) Rip his eyes out of his head with your fingers.

3) Crush his throat so he can’t breathe.

Now, come after me with one of those moves and see what happens.

Hopefully you’ve paused for a moment — this is where reality kicks in. You see, you can’t just be told some moves and then expect them to work for you in the heat and emotion of a violent confrontation. Like it or not, you have to train.

What do you think the Delta Force, Navy Seals, and other covert ops like the Green Berets do with their time? They spend a lot of time in tactical training.

OK, now that that’s out of the way let’s get back to some serious discussion on self defense.

Self defense is kind of like emergency planning and survival. It can be separated out into four phases; mitigation, preparation, response and recovery.

Mitigation is everything you do to lessen the likelihood of disaster striking. In self defense it includes: Becoming aware of high crime areas in your community.Knowing your environment, avenues of escape, weapons of opportunity, where the closest safe place is. Not placing yourself in danger unnecessarily by going into unknown neighborhoods or responding to unwanted verbal insults.

Anything you can do before an event that will decrease the possibilities of something unwanted occurring.

Preparation is planning, training, getting supplies, buying guns (and understanding how they work and how to use them safely – see this article on gun anatomy for example), whatever you feel necessary to deal with disaster.Yes, being in a physical confrontation where your life and health are at stake can be classified as a disaster, albeit a personal one.

Reality Based Self Defense

Take a reality based self defense class. I don’t mean a weekend workshop with Master Ken, I mean take a class that is ongoing and is based on reality self defense, not sport or traditional martial arts.Learn how to use a firearm, get your concealed carry permit.

Stock up on supplies, batons, pepper spray, survival flashlight, knife etc. One article I read recently described the 4 firearms the author felt were a part of any good survival kit: handgun, 22 rifle, shotgun, assault rifle. I tend to agree with him. Remember to get lots of ammo and be well trained with every piece of equipment you purchase.

Learning how to use something in an emergency really doesn’t work very well.

Take a First Aid class and have a first aid kit in your vehicle and at home so you can stop the bleeding if you or someone else gets injured. If you carry weapons like a knife of a firearm make sure you can treat the injuries that can be created by them. A trauma bandage, stop clot or something similar will do the trick.

Response is just as it says. OK, so you tried to avoid the confrontation, you did everything described above but here you are. The guy is big, mean and for some reason he doesn’t like you very much. He is yelling at you and saying something about ripping your head off and other very unpleasant things.First respone: Flight RUN! Flee, escape, get out of there. Best self defense technique in the world, feet flying in the other direction.

I know, you want more.

We are going to talk about this a lot in future articles, it really cannot be examined in this one. But here are a few good points:

Always have tactical advantage. Never let yourself be backed into a corner. Have superior numbers, weapons or position.Don’t stand still, a moving target is harder to hit.

Do whatever it takes to get yourself to a safe place.

If You Have To Fight, Attack His Vision

If you have to, attack his vision, breathing and mobility. If he can’t see you he can’t hurt you.Use the pepper spray you carry in your pocket. Throw dirt in his face, spray him with bug repellent, a fire extinguisher, anything you have available. If you don’t have anything like that then you missed step one and two of this article. If you have to engage physically then use your fingers to take his vision. Yes that means stick them in his eyes.

Strike to the throat, interrupt his breathing. It doesn’t matter how big he is, you can’t build muscle over the front of the throat. The solar plexus is your second target, just below the sternum on the front of the chest, punch him as hard as you can. Then get out the way in case he pucks on you.

Take his mobility by breaking his foot, dislocating his knee. If he can’t chase you, you win!

You survived, you may have even won. Now what? You may face legal consequences; you may have an emotional response to harming another human being. You may be injured and need to seek medical attention. Recovery is about doing what you need to do to return to a pre-incident state of being, or better.You may be able to recover quite well on your own or you may need help. Make sure you get it, whether it’s a doctor, attorney or just a friend to talk to. A violent confrontation can affect us on many levels, make sure you take care of yourself afterwards.

Next week we will talk about the Response aspect of self defense in more detail and break it down into principals and concepts that are vital to your survival. (Subscribe to the Crisis Newsletter for updates.)

If you would like to learn more about reality based martial arts and get a deeper look into the world of real life combat for survival, contact the author, Raven Hicks of Spirit Warriors Martial Arts. Spirit Warriors provides reality based martial arts training and Security and Law Enforcement training in Santa Fe, New Mexico. Please visit www.martialartssantafe.com for more information. You can contact Raven at raveneagle1212ATgmail.com or 505-913-0199.

More Information about Hand to Hand and Unarmed Combat

More Information about Hand to Hand and Unarmed Combat