You are here: Home / Natural Disasters / How to Survive Mass Extinction 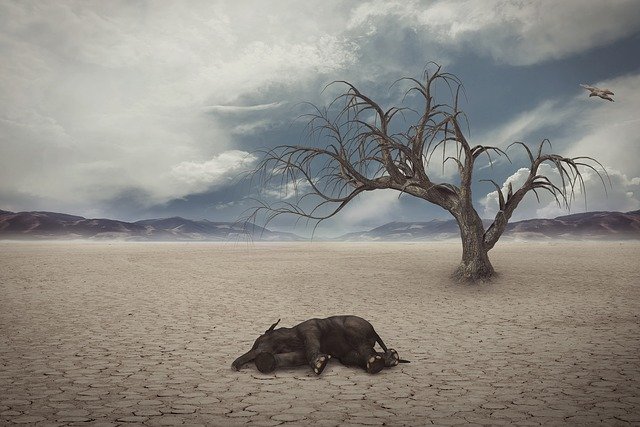 Despite the fact that humans tend to feel superior in every way to the animals and plant species around us, without those other forms of life we cannot survive.

We are all connected in this world. When species (like honeybees) start disappearing around the world, something has gone terribly wrong.Does it sound apocalyptic? Well, it is. You see, there’s this thing called global warming. We’ve all heard of it.

In fact, back in 2001 the United Nations called on over 2,000 scientists around the world to discuss and give recommendations on global climate change.The final written product indicated that humans in fact had very likely caused global warming.

Now those scientists have released a second document to the U.N. According to CNN, this one actually includes a chart that maps out the effects of global warming with every degree that temperature rises.

In fact, according to Andrew Weaver, a climate scientist with the University of Victoria in British Columbia, the chart in essence shows, “a highway to extinction. But,” he includes, “on this highway there are many turnoffs. This (document) is showing you where the road is heading. The road is heading toward extinction.”

Though the chart stops short of indicating that humanity would go extinct, it does not stop short of saying that hundreds of millions or even billions of people could die along the way from disease, starvation, heat waves, floods, droughts, and more.

Further, the report indicates that global warming has already negatively impacted bio systems and conditions for several species. What’s more, if the temperature rises another Celsius degree the report goes on to say that between 400 million and 1.7 billion people won’t be able to get enough water, allergic pollens will increase, and some amphibians will go extinct.

However, if the temperature were to rise another degree from there- which it will unless we start to do something about this globally- then about 20 to 30 percent of the world’s species would near extinction.

Now remember what was said earlier about all of the world’s life being connected? Here’s where the rubber meets the road. For instance, let’s use the recent problems with honeybees to illustrate our point (as extinctions around the world could bring varied issues).

Back in October of 2006, beekeepers around the United States reported that hundreds of thousands of bees were dying inexplicably with whole colonies being devastated. Because of this, in December these beekeepers spoke to the House on what they have termed ‘Colony Collapse Disorder’.In fact, scientists, beekeepers, and officials have gotten together a task force that is called CCD to look into this epidemic.

In short, things haven’t gotten any better. At this time, beekeepers are still losing between 50-90 percent of their honeybees.

Further, according to Caird E. Rexroad from the Agricultural Research Service, his agency “believe(s) that some form of stress may be suppressing immune systems of bees, ultimately contributing to CCD.” Of course, that stress could be virtually anything.

Could global warming be the culprit? Of course it could (whether directly or indirectly). Further, the problem could be caused by a host of other things including pesticides, mites, pathogens, and migratory issues. No matter, if this trend continues with the honeybees, they will cease to exist in the United States by 2035.

And that’s a problem.

Besides the number of people that would lose jobs; beyond the fact that the country would now be forced to import honey, is the notion that seems forgotten by many.

Remember, we are all connected.

Thus, if the bees die, than flowering plants don’t get pollinated. Many fruit and vegetable plants are flowering plants. So, it stands to reason that our food sources might become decimated.

All told, this would cost our country billions of dollars right off the bat. And that’s not even really considering the other animals out there that survive because of plants that require pollination from honeybees.

In other words, the circle of life would be disrupted.

How To Survive Honeybee Extinction

First, there is no proof that global warming has anything to do with this loss of honeybees. That said, isn’t is a little strange that this is occurring amidst large scale temperature increases, tornadoes all across the United States, hurricanes, tsunamis, and a lack of snow in the winter (combined with an increase of it when it usually doesn’t snow)?

Of course it is.

Further, France’s recently documented Hornet problem seems tied to global warming (their survival in that area does at least). Further, since these Hornets have set down in France they’ve begun to attack the honeybee population (see what I mean).

Therefore, the first thing to do about all of these extinctions is to follow our scientists’ recommendations on global warming (seems obvious, but that doesn’t mean their recommendations will be followed). If these scientists say that certain emissions and practices must be cut, then let’s do it. In fact, let’s get to it now!

Because if we don’t, it’s entirely feasible that no article on Secrets of Survival will help, period.

Beyond global practice changes, however, here’s what one might do to survive the mass extinction of the honeybee.

Consider growing root vegetables yourself- Root vegetables like carrots don’t rely on pollination from honeybees. Therefore, if you grow these on your own (subsistence agriculture) it will serve to help you make it through what is sure to be a terrible economic and environmental issue. Further, it would be prudent to call a garden center in advance to ask which plants would do best in your area.

Consider stocking up on food – During periods of economic crisis and food shortages, everything can be effected. Therefore, it might be prudent to begin to stock up on foods like dry beans, rice, and others (don’t forget water, by the way).

Further, purchase #10 cans, oxygen absorbers, PETE bottles, and foil pouches for storage purposes. If you begin to slowly begin this now, it could help. If not, you’ll be there with the rat race and that’s never a good thing.

Save money – Obviously, the extinction of the honeybee population would have a terrible effect on our economy. Thus, you’d be wise to get ready for such an occurrence. Taking just a little more from that paycheck every week just in case couldn’t hurt, could it?

Now whether you trust the banks or not during a period of crisis is your own decision.

Vitamins – During times of food shortage, malnutrition can be an obvious problem. Vitamins, according to some scientists, can help with this. Thus, having extra supplies of vitamins that aren’t due to expire for awhile could be beneficial. Remember that vitamin C is important. Just not consuming it anymore can’t be a good thing.

Don’t buy that extra thing – If our country were to lose billions of dollars due to honeybee extinction, there’s no guessing what that might do to the nation as a whole. Further, the after effects on other animal and plant populations would definitively exacerbate the problem (in the end, we might be talking about much more than one extinct species).

Thus, the economic part of this problem could be terrible. So, ask yourself this question. Do you believe that this could all feasibly happen? If the answer is yes, consider not spreading your wealth too thin with that next grand purchase.

With all of the environmental changes we’re experiencing, mass extinction – according to scientists – is a real possibility. It’s important that as a society we begin to realize how everything in our world is connected.

A mass extinction would be a huge problem.

With the honeybees it could be quite lethal.

So consider this as you make your daily decisions. It might be necessary for your survival.

Draft of climate report maps out ‘highway to extinction’

How to Survive a Comet Collision with Earth

Click here to learn more about Secrets of Survival and our writers and contributors.
Are You Prepared for a Worst Case Scenario?

How to Survive a Comet Collision with Earth