You are here: Home / Natural Disasters / How to Survive a Neighborhood Wildfire 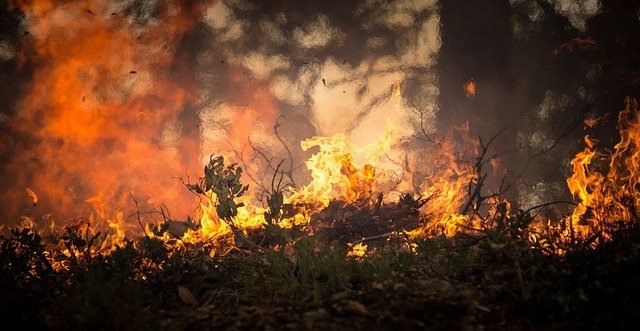 Homes, property and lives can be lost in a wildfire.

If you live in a region of the country at risk for wildfire, you should have a plan for surviving a wildfire, and also steps you can take to try to protect your home from catching fire.Thinking about surviving a fire speeding down on your neighborhood actually is a question that stretches far beyond where you live. First, four very relevant questions:

2. What are some strategies of wildfire prevention?

3. How are wildfires fought?

4. What can you do to protect your own neighborhood and home?

Unfortunately, there is no good answer to this question.Anything from a campfire getting out of control to a dropped cigarette or simply a bolt of lightning striking the ground — or worse, a tree — can start a wildfire. Accidents can also cause wildfires. Back in 2002 a wildfire which burned out of control for nearly two weeks caused by a National Guard helicopter looking for drugs ( pot farms ). This helicopter clipped a power line, which caused a spark, and spark that served as the match.

That’s how fast an arid or semi-arid region of the country can catch fire.

Still, for a wildfire to truly catch on, more than a match is needed. First, there needs to be a long stretch of burnable forest. Second, there is usually a drought or lack of water or rain clouds. Third, there is often an intense heat wave. Fourth, there is usually an abundance of dry forest.

Actually — dead forest. Which, by the way, is highly flammable and a problem.

Then there’s the wind factor. Strong winds can help propel a wildfire, sometimes even across barriers, over roads, and even over streams and rivers. When that happens, several areas of the forest or mountains can set a blaze, with high winds pushing an inferno toward your community.

The United States policy on wildfires used to be to suppress them completely. However, we now know that forest fires serve many purposes, including getting rid of excess brush and the allowance of life to bloom ( at one point, for example, it was learned that the Giant Sequoia Tree’s life cycle depended on fire ).This new knowledge helped to spur on the idea of controlled burns. In other words, those purposefully set with the idea of taking away underbrush. Further, physical fuel removal is also sometimes conducted, which results in the chopping down or taking away of trees or other flammable forest substances. The theory is that by thinning out forests and highly flammable dead debris, wildfires can be better kept under control. Further, controlled burning may keep the life cycle going.

Unfortunately, controlled burns have, on rare occasions, ballooned into large scale wildfires. Further, an argument can be made that forests are still burning just as much as they were before such measures were taken.

How Wildfires Are Fought

Different places (Canada, the U.S.) have different ways of describing their forces. But the available resources are roughly the same.

This has historically been done through watchtowers. Of course, aircraft also play a major role in the detection of wildfires today. Interestingly, more recent technological advances now allow us to utilize satellite technology to pinpoint wildfires. Are we getting off the topic of surviving of a wildfire? Not at all. One proven method for wildfire survival is early detection. The sooner we catch something burning or simply showing signs of smoke, we can rush a response to put out any flames before they get out of control and take lives and property.

Fighting Wildfires From The Air

Often wildfires are fought on numerous fronts. One of these is the air.Fixed wing aircraft or helicopters often serve to pummel fires below with fire retardant. Helicopters have additional uses when fighting fires, including transporting small units of firefighters and equipment to hard to reach places. Sometimes these specially trained firefighters may rappel or fast-rope down from helicopters.

Further, firefighters sometimes parachute out of aircraft into the burning wilderness. These people are called “smokejumpers”.

Fighting Wildfires From The Ground

Of course, firefighters use water to try and control wildfires (in those hard to reach areas, they tend toward portable pumps). However, there are far more ways man has learned to take on a burning forest than simply water.

Most of these lend toward breaking up the fuel source. In other words, creating space between the moving fire and the rest of the forest.

One approach to create space is through the use of chainsaws. By cutting down trees, sometimes fire is unable to spread from tree to tree. Of course, strong winds can sometimes put a damper on this philosophy. Bigger machinery like bulldozers are also used when warranted to create a large ditch / barrier in an attempt to stop the spread of fire.

When A Wildfire Rages Near Your Home

So far the focus has been on preventing the fire from getting to the outskirts of your neighborhood. But what if that doesn’t work?

Well, that could be bad news or terrible news. Often, the extent to which a wildfire will impact you depends on how updated your house is. You see, much of the property damage that has occurred in high frequency wildfire areas has been a direct result of highly flammable building materials used in the construction of houses.

Is Your Home Built Of Flame Resistant Materials?

However, more modern homes should — and usually are — built out of flame resistant materials in high wildfire areas. Still, if you’re building or remodeling and live in such a zone, remember that roof construction is extremely important (go with metal, tile, or slate).

Beyond that, it might also be a good idea to consider brick, stone, and concrete, as they are all more resistant to fire than wood. Still, there are commercial fire retardants that can be used on wood, if needed.

There is more to think about regarding your home than construction, however. For example, try to keep the amount of fuel ( propane tanks, for example ) near your home and/ or property to a minimum.

Beyond this, breaks in fire fuel — often termed, firebreaks — are smart to have around neighborhoods and/ or homes. Basically, these encompass a stretch of land with nothing that can burn on it.

Bring that up with your Neighborhood Watch Committee.

When a wildfire is getting close, you may want to (or may be ordered to) evacuate. THEN EVACUATE! This is the single most important part of surviving a wildfire. Your house is important, but it is not as important as you.

The good thing is that excellent wildfire detection often will allow a homeowner some time between acknowledgment of a wildfire and evacuation.

Turn On Your Sprinkler

You may also want to leave that outside sprinkler on. Some people have even been know to attach sprinklers to their roofs if drainage is sufficient.Fact is, wildfires can cause a problem even when a forest fire is a distance away. You see, smoke can still be a problem. Closing doors and vents as soon as you hear about any wildfire bearing down or smoke blowing your direction.

Last, you shouldn’t forget about clothing. In high frequency fire areas, own fire retardant gloves, boots, and even clothing, such as fire retardant coveralls. There are also emergency escape hoods. These are designed to filter out smoke and poisonous gasses. Some homeowners even purchase fire fighting equipment themselves.But remember: evacuate that wildfire when you’re told to. First order of business is to survive. Second, is to save your home; not the other way around!

Wildfires are a problem that can bring danger directly to your neighborhood. Along with this, it’s important to know the ways in which these fires start, can be prevented, are fought regionally, and can be kept at a distance from your own home and/ or neighborhood.Good preparation can help you survive a wildfire and protect your investments from any wildfire intent on attacking your neighborhood and home.

Fires Raging: How to Survive a Wildfire

Regional Disasters: Are You Insured from Catastrophe? Don’t Make This Common Mistake and Lose Everything

How to Find Clean Drinking Water After an Urban Disaster

How to Survive an Avalanche: Escape Certain Death

Fires Raging: How to Survive a Wildfire

Regional Disasters: Are You Insured from Catastrophe? Don’t Make This Common Mistake and Lose Everything

How to Find Clean Drinking Water After an Urban Disaster

How to Survive an Avalanche: Escape Certain Death