You are here: Home / Man Made Disasters / Consequence of a Major Terrorist Attack: Airport Delays 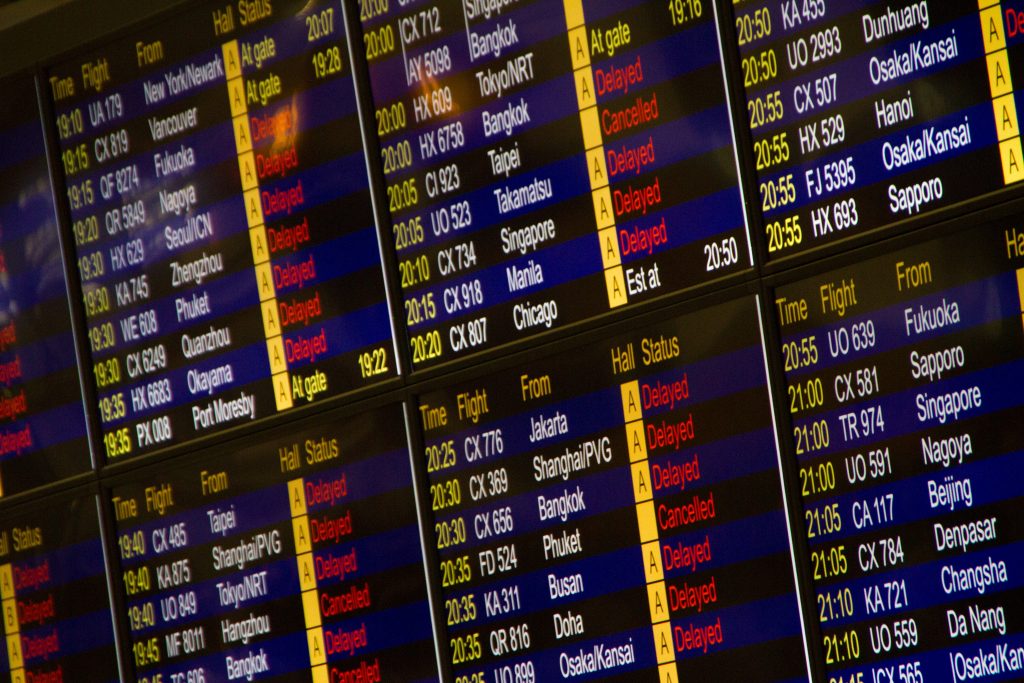 One possible situationWho doesn’t like Miami? Even though you’re tired of business related travel, at least this time the company sent you somewhere nice. While you’re waiting at the terminal, three loud beeps echo on the loudspeaker. Sounds like the emergency broadcast channel on television. But it isn’t.

All Flights Canceled Due To Terror Attacks

Instead it’s the airport’s way of telling you that something bad has happened.”We regret to inform customers that all flights leaving Miami Airport will be delayed for the next three hours. Those bound for New York’s JFK Airport will have to wait longer, we’re afraid. That flight is cancelled indefinitely due to unfortunate circumstances in the area.”

As the phrase ‘unfortunate circumstances’ echoes in your mind, you glance upwards at the television in unison with all of the other annoyed soon-to-be passengers. An unfamiliar newscaster is on. Then he speaks the words that you’ll never forget.

“Airports are struggling with how to tell New York bound passengers the bad news. Miami is no exception. After all, it’s one thing to be stranded at the airport. It’s another thing to hear that the reason for this is because a dirty bomb was detonated near your home.”

Your first reaction? I need to get home to my family. Your next?

How? Flights aren’t going out. I’m literally stranded at the airport.

Stranded At The Airport — Now What?

Well, in the above case the first thing you’d need to ask yourself is can I go home? After all, the detonation of a nuclear bomb means that radiation and/ or fallout is in the air. Thus, a lot would depend on the size of the nuclear bomb and the after effects. A dirty bomb- utilized in this scenario- would usually not be as far reaching as a larger nuclear bomb, let’s say.

Said another way, depending on the situation, you may or may not be able to come home. If it means you’re going to die on the way. . . well, let’s just say that won’t be in your family’s best interests.

So, you clearly need to ascertain vital information regarding the disaster. To do this, you could do attempt the following four things.

1. Call your family. It may be difficult if they’re very close to the disaster to get through. Keep trying, though (hopefully they know what to do in the case of a nuclear attack). If you do get through, explain that you’re stranded at the airport and ask what emergency personnel are telling them. If your family knows what to do in the case of nuclear fallout (ex.- build a fallout chamber) then you should feel good about their chances.

2. Call extended family or friends a little farther from the situation if you can’t get through to your immediate family and ask the same questions.

3. Call emergency personnel just outside the area (police, firemen, etc.). If that doesn’t work, try the Red Cross. Those right in the mix of things probably won’t be able to help you anytime soon (they’ll be quite busy).

4. Get in touch with emergency personnel in your current area (Miami for instance). Further, watch the television.

Now, if it looks like it’s dangerous to come home for a long time, you’re going to be stranded at the airport for a long time. Thus, it would be time to get a hotel room and continue to stay in contact with appropriate people and personnel to judge the situation (again, it doesn’t help your loved ones for you to die or get extremely sick on the way in).

However, if it looks like you’ll be able to come home soon or immediately after a disaster (could very well be the case if a dirty bomb were to detonate) here are some things to consider.

How To Get Home When You’re Stranded At The Airport

1. First, most airlines will seat you on the next available flight if they can automatically. Thus, this could be an option.

2. You may want to talk to those booking the flights or even the management team to guarantee that you get on the next available flight (if that is an option). Ever watch The Amazing Race? If you have, then you know that finagling can be a major part of getting the first flight.

3. If the airline you were planning on flying is seeming problematic, check out other airlines at the airport. Don’t be afraid to finagle with them, either (unless you want to be stranded at the airport forever).

4. Then there’s the alternate flight plan. If JFK has been closed, consider taking a flight to Newark, or Danbury, Connecticut, or even Philadelphia. Then rent a car, take a taxi, or get a ride from a loved one from there home.

5. Speaking of taking a taxi, that may also be an option. However, that could cost a pretty penny and they probably wouldn’t drop you right off in New York during a terrorism crisis. Thus, you’d likely to have to do the same from a nearby point (get a ride somehow).

6. Finally, you could rent a car. Some rental car companies still allow you to drive cross country and drop the car off at a dealer at your destination.

Being stranded at the airport as a consequence of a terrorist attack is a risk people face when they travel out of state or even out of the country.

Further, if you need to get home because of a major problem like a terrorist attack with a weapon of mass destruction, you’ll need to weigh the dangers regarding coming home immediately, to waiting a few days before setting out for home (a nuclear attack results in radiation being dispersed for many miles by the wind, contaminating anything it comes in contact with, with toxic effects on humans, leading to death in some, cancers in others; seek shelter immediately following the blast, and then wait a few days before heading in the direction of home, if home is in any direction of where a nuclear weapon has detonated).

This is why you and your family should all know what to do in the event of a worst case scenario.

If one of you isn’t there, they may still be alright; everyone needs to be on the same page — get home as soon as possible (this is where it’s important to make sure your family all have a get home bag). If the area where “home” is has suffered disaster, choose a “Plan-B” location, and even a “Plan-C” … each one in the most probable direction of safety.

A nuclear attack is of course one of the most devastating weapon of mass destruction terrorists may use on America. Determine how far out of town you and your family should go to escape and have a safe location to meet — it could be a friends house or it could even be a public school or church, should you not know anyone in a specific town.